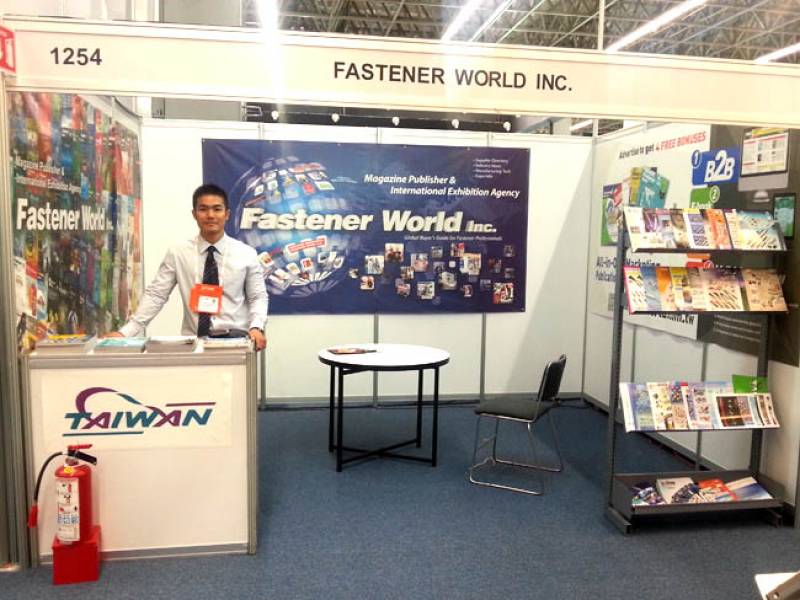 by Gang Hao Chang, Fastener World Inc.
Mexico is to the south of the U.S. and is also a significant gate to enter Latin American markets. Its excellent geographic location and flourishing economy continue the growth of domestic manufacturing, import, export, and distribution. In addition, the construction of plants of foreign car manufacturers in Latin America and the promotion of local governments’ economic boosting policies both enlarge the influence of Mexico in international trade. In response to the growing demand and expectation from domestic and foreign industrial supply chain to end-users, the annually held Expo Nacional Ferretera, under the sunshine of Latin America, had its opening again on August 29, 2013, with “thousands” of visitors flushing into the expo center.
The show last for 3 days and was crowded with 837 exhibitors from local Mexico and other 18 countries showcasing their brands. The largest exhibiting delegation was from Mexico, comprised of 535 exhibitors, followed by 193 companies from China, 39 from the U.S., 35 from Taiwan, 10 from Spain, and others from Colombia, Brazil, Italy, Germany, India, Turkey, Japan, Austria, Israel, Guatemala, Panama, Canada, and Channel Islands. New products of several exhibitors were full of creativity and were also the focus of visitors. Exhibits included a variety of fasteners & fixing units, tools, building materials, gardening, locks & fittings, machines, hardware, chemical supplies, electrical appliances, and sanitary ware, to name a few.
The outward passion of Latin American exhibitors was concretely demonstrated through their highly decorative stand building and enthusiastic interactions with visitors. Show CEO Eduardo Casanova made his statement in the welcome message, “25 years of shared success confirms our commitment to both exhibitors and buyers. Our goal is and will remain, that all participants leave the event stronger and closer to their goals.”
The onsite observation revealed that many exhibitors were “frequent participants of the show” and that this show was for some buyers a “must-to-go” in their calendars every year. The number of exhibitors for Mexico, China, Taiwan, or Spain, compared to last edition, all shows a higher record, which can be attributed to the optimistic attitude of exhibitors to Latin America; On the other hand, visiting buyers expressed interest in products from Taiwan and Asian countries, and were happy to experience Asian products directly at the show. They also recognized the dedication and involvement of exhibitors in quality improvement and look forward to possible cooperation in the future.
After the success of 2013 edition, the organizer also announced that the next show will be given on August 28-30 in 2014.